GlassX® is highly efficient because the system has no threshold losses;
solar energy is gained even in the case of diffuse solar radiation.

The above video explains what makes GlassX so revolutionary. But for you readers out there, here’s a more in depth discussion.

The GlassX solution? Add “thermal mass” to the glazed areas of buildings, allowing them to transmit visible light while absorbing infrared radiation.

At the core of GlassX is a Phase Change Material (PCM), which provides a thermal mass equivalent to that of 16” of concrete. This PCM is made of Calciumchloridehexahydrate (CaCl2 6H2O), a nontoxic salt, whose melting point is precisely at room temperature. In summer, when the building interior rises above this temperature, the PCM melts and absorbs the thermal energy that would otherwise lead to overheating. The PCM absorb internals heat loads by convection, but also absorbs external solar energy input.

After 8 hours of direct solar radiation, the PCM will likely be entirely molten. However, by this time, the external temperature will have started to decrease below the melting point of the PCM. It will start to recrystallize in the cooler night air. The next morning, the PCM will have solidified completely, and the cycle will begin again. This makes GlassX a passive system.

This thermal storage has two effects; shifting peak energy demand later into the night when temperatures typically fall off, and reducing average interior room temperatures by 5-9°C, drastically reducing the need for air conditioning. In winter, GlassX maximizes solar gains, charging up the PCM core, allowing it to radiate throughout the night as it solidifies.

Façades need a shading device that can allow solar gains in winter, but block direct solar radiation in summer. GlassX achieves this by way of a transparent prism. This prism, which is located in the space between the outer glass panes, allows light from the low winter sun to pass, almost unimpeded. When the sun is at a higher angle, between April and September, the prism reflects direct solar radiation. Only the diffuse, low-energy component of the solar radiation – visible light – passes through to the interior.

Completing the all-in-one passive solar design is quadruple insulating glass unit with inert gas and low-e coatings, which provides insulation equivalent to that of an R12 wall.   U-value of 0.08 Btu/F-ft²-hr. This helps keep warm air inside during winter, and cold air inside during summer.

Combining the translucence of glass with the thermal properties of a solid wall. 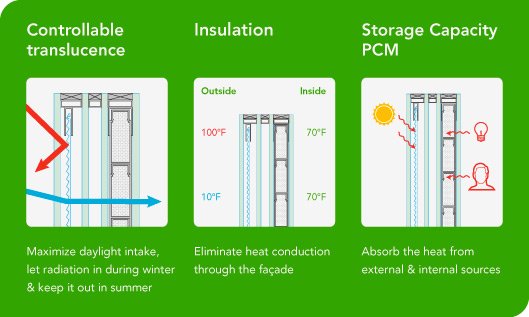 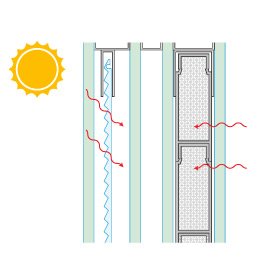 Summer: Sun high in the sky > 40°
Total reflecion of the rays 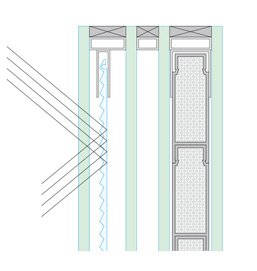 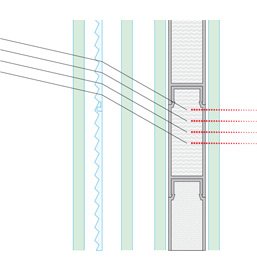 Why you need to build with GlassX?
Here are just a few of the great reasons.

What’s the Deal with PCM

How does GlassX know what season it is?

How much can GlassX save?